I have never really eaten a lot of papaya before but whilst conducting my research into fruits that are good for arthritis, I found such overwhelming information that I have been out today and bought some!

This pear-shaped yellowy fruit often has an orange or reddish inside with black seeds in the middle. The seeds can be eaten and have been described as similar in taste to black pepper.

Papayas contain carotenoids and one in particular called lycopene. We have mentioned these before when talking about the supplement Astaxanthin.

Carotenoids such as this can reduce inflammation, in fact in places like Mexico and Hawaii where they are grown people would use them as a remedy for things like irritable bowel syndrome (IBS). 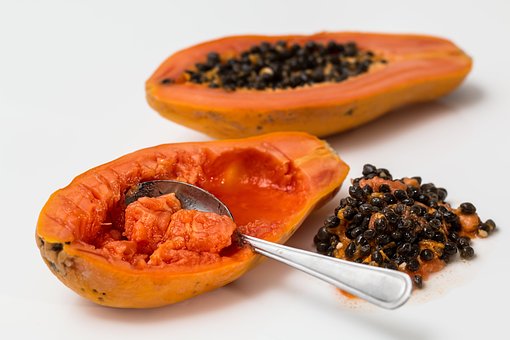 We have spoken about vitamin C a lot whilst discussing these fruits, we mentioned that vitamin C will help improve iron absorption which can help people who are deficient (anaemic).

Well if you are at the opposite end of the spectrum and have too much iron in your body the lycopene content in papaya has the ability to reduce excess iron and take it back to the satisfactory level.

This is also a huge benefit as too much iron can produce free radicals which can attack your body.

Some other benefits include early research that shows papaya may be able to not only minimise the risk of cancer but even slow its progression.

Also for the avid sunbathers, papaya may also help you recover from sunburn. Might not be arthritis related but worth knowing I would say.

Papayas ability to reduce chronic inflammation could make it a perfect fruit for arthritis!